Scan the press on soul-groove outfit Dirty Streets and you’ll see numerous references to rock, soul, and dirty-blooze touchstones like the Faces, Humble Pie, Otis Redding, CCR and more.  Spin Dirty Streets’ records and you’ll hear all of those echoes, plus others—some jazz timing, some acoustic balladry. But by and large, what you’ll hear is a raw, rowdy blend of Motown, Stax and rock—the pure American blood-beat moving through the heart of Memphis groove. Austin-born Justin Toland (guitar/vocals) found his own musical food early through his father, a classic-rock aficionado who turned Justin on to the Stones, Creedence, soul music and the Stax sound.  At 17 Toland moved to Memphis and met Thomas Storz (bass), a native of the city, through mutual friends; the pair found common musical ground and began playing groove-grounded rock with a series of temporary drummers.  Andrew Denham (drums), a Shreveport-born drummer and British hard-rock fan, joined up with Storz and Toland in 2007.  The trio began demoing using a basic setup: a single cassette recorder, no tracks, no real separation, just mics on the bass/drums and guitar and vocals live in the room.  Without the option to isolate, tweak or sweeten after the fact, Dirty Streets became accustomed to running through a take 40 or 50 times as they worked to get it right, all the way through.  By the time they began gigging live, that level of discipline had honed Dirty Streets into an instinctual, responsive outfit.  Bootleg recordings of their shows in and around Memphis helped to generate buzz, and established Dirty Streets’ rep as a band whose timing was as sharp as their sound was ragged. Albums followed—Portrait of a Man (2009), Movements (2011), Blades of Grass (2013), White Horse (2015), Distractions (2018), and their forthcoming live effort Rough and Tumble, an LP drawn from an in-house performance for the DittyTV Americana music television network. All of these albums are steeped in the raw rock-soul groove that serves as the band’s taproot, the musical core from which all of its explorations still proceed.  And within that core, too, is the element that gives their music, the music they love and play, its unique character. Rough and Tumble includes eight positively explosive takes from three of the Memphis trio’s previous studio albums, and also features two meaty, revved-up covers by the great Joe South.

Whereas most outfits would love to emerge from the studio with a final mix as precise and vibrant as “Rough and Tumble,” Dirty Streets manage to accomplish the feat live from the stage. It might take listeners a few spins to discern that this isn’t a studio set. Great soulful vocals, a stellar rhythm duo, and a plethora of guitar tones only scratch the surface of why this album succeeds. In the end, the fact that the band recorded it live may become incidental. To call “Rough and Tumble” an album that is both tight and loose may be oxymoronic on its face, but it works here. – Willie Witten / BLUES ROCK REVIEW

Fans of Free and Humble Pie back in the day, will find these slots perfectly into your collection. Include the Dirty Streets to a playlist of similar 70s acts and be prepared for friends to ask about this band they don’t recognize from 40 some years ago. That’s likely the biggest compliment anyone could pay Dirty Streets who churn out this blue-jeans, retro-tinged, unapologetically nasty rawk as if they invented it. – Hal Horowitz / AMERICAN SONGWRITER 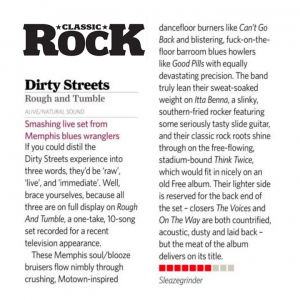 Still in their 20s but sounding decades older, Dirty Streets have been making a name for themselves since 2009’s Portrait Of A Man.

The monolithic riffage and Justin Toland’s assured vocals on behemoths such as Looking For My Peace and Good Pills show that when it comes to taking volcanic early-70s-style blues rock to modern times, Dirty Streets are now furlongs ahead. – Kris Needs / CLASSIC ROCK
FINAL VERDICT: 8/10

For those of you who have been lamenting that there is no “good music” out there, let not your hearts be troubled. Dirty Streets are here to wipe away your tears. – BLUES ROCK REVIEW (9/10 review)

On their third album, 2015's White Horse, they once again unleash a fireball of hard boogie-fortified guitar swagger that sounds solidly authentic without giving the uncomfortable feeling that these guys have been practicing in a mirror so they have their moves down. Dirty Streets' guitarist Justin Toland has a natural feel for hip-shaking hard rock, tossing out riffs and laying down lead lines with impressive dexterity, and the fact he can confidently hold down lead vocals at the same time only makes his fiercely strutting attack all the more impressive. Bassist Thomas Storz and drummer Andrew Denham are less flashy but equally effective, lending an impressive throb that keeps the bottom end just tight enough to stay grounded and just loose enough to inspire beer-sodden rooster dancing among the faithful. – ALL MUSIC

You don’t hear too many great blue eyed soul bands these days, but The Dirty Streets hold their own with the likes of The Small Faces. This comparison is apt in the soulful crooning of both "No Need To Rest" and its immediate follow-up, the country / quasi-mystic "Movements #2" and especially on mod / soul / psych head nodder "Truth" (…) It’s no easy feat to take something old and make it feel exciting, fresh and new all over again. This is a stunning album. Recommended for all. – Paranoid Hitsophrenic Rating: 4.5/5

Blades Of Grass demonstrates reverence for nostalgic styles, married with palpable excitement at creating something new and sexy. – The Blues Magazine

They notice what’s going on outside the window of the train they’re on—“Living in a world of underpaid teachers/Congressmen are getting’ rich/Sitting in the bleachers” while we’re just “waitin’ on a leader.” It all peaks on “Try Harder,” when singer/guitarist Justin Roland snarls over a high-stepping riff about a society which pushes you into poverty and then tells you to “try harder.” Blades of Grass is raw realism, yet it also throws off sparks of psychedelia without a hint of self-consciousness, one of many signs of a young band growing up before our eyes. – Rock & Rap Confidential

On Blades of Grass, The Dirty Streets pay great homage to the blues-inspired classic rock sound that came before. With of course a fresh take and impressive talent, these Memphis rockers leave it all on the album. Toland’s vocals recall that of an early Paul Rogers, accompanied by Thomas Storz’s intricate bass lines and Denham’s complex beats. The Dirty Streets put out one hell of an album from start to finish. – Blues Rock Review

A breath of fresh air to hear someone from Generation Y basing their sound on something before 1987. – Dirty Impound

Raw, bluesy guitar rock with a funky roots/garage edge and some ripping six-string licks. The music carries an authentic 60s/70s rock vibe that’s built around heavy power trio blues riffing with a psychedelic edge and a touch of Southern rock. – Music Is Amazing

This album is down and dirty and, at times, psychedelic. But don’t assume that means Blades of Grass is all over the place. The Dirty Streets’ groove is practically precision-guided. – Adobe and Teardrops

A group with an impeccable instrumental chemistry, immediately familiar hooks brought out through exceptional songwriting and a vocalist whose approach is well on its way to becoming a defining element. – The Obelisk

Third-Time Charm : The Dirty Streets branch out on album number three. – Interview with the Memphis Flyer

Sounds like it comes from another time. – Examiner LA

Dirty Streets are making a name from necromancy, digging up the well-loved sounds of late 60s, early 70s blues rock and performing it perfectly in 2013. – Supajam

Drenching boulder-heavy riffs in southern soul grease isn’t a particularly revolutionary idea, but combining these elements in short punchy tracks at a time when few bands are making straight-ahead rock records make Dirty Streets something of a revelation. – Midnight To Six

Although they reached back sonically, Blades of Grass sees the Dirty Streets moving forward musically, evolving with an album that places an emphasis on the songs and arrangements. – Go Memphis

Built in the image of the classic power rock trios, with just a pinch of deep Southern gothic thrown in, Dirty Streets are all the more refreshing for not trying to be the next big thing. They rock, and they know it doesn’t really matter what era you’re in — if you can rock, you’ll work. –AMG

Blades of Grass kicks off with ‘Stay Thirsty’, a track steeped in 60’s blues-rock (Humble Pie, The Rolling Stones) and contemporary heirs The Black Crowes and Alabama Shakes, while subsequent tracks find the band drawing inspiration from folk, heavy psych and soul music (all three core members are originally from Mississippi, which had an often overlooked 60’s soul scene). – Subculture